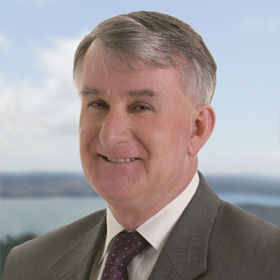 Michael Gill has practiced for almost 45 years, mainly as a specialist insurance lawyer. His service to insurers and the law community is well-recognized by his peers. Michael has also had many roles in the legal profession in Australia, including President of the Law Society of New South Wales and President of the Law Council of Australia.

In April 2014, Michael participated in a New Perimeter project in Vietnam where he spent a week teaching law students on ethics, access to justice and pro bono. Three lawyers from the Republic of Ireland were also involved. The course was part of a project to develop curriculum on access to justice, ethics, pro bono and professional responsibility for law students across South East Asia. The project came about as a result of a need identified by New Perimeter's project partner, BABSEA CLE.

While teaching in a classroom environment was new for Michael, pro bono is not. Michael is passionate about work in the nonprofit sector and has been involved in a numerous pro bono projects, both within DLA Piper's domestic pro bono practice and with New Perimeter. He was heavily involved in pro bono work in the New South Wales Law Society, particularly as a Young Lawyer and as President. A former Chairman and CEO of Phillips Fox (DLA Piper's Australian predecessor firm), Michael was also instrumental in building the firm's pro bono and corporate responsibility initiatives.

The Curriculum Development Project was not Michael's first New Perimeter project - he had also taught in Myanmar, as part of a project to support the development of clinical legal education in law schools and he conducted the evaluation of a long-term project that encourages the spread of pro bono in Mexico.

“We are so delighted that Michael has shared his knowledge and experience on multiple New Perimeter projects,” said Lisa Dewey, Director of New Perimeter. “Michael brings incredible insight, curiosity and an enthusiasm for learning that is felt by the students and our colleagues and we are grateful for his work.”

Michael has recently concluded his term as President of AIDA (the International Insurance Law Association), where he worked towards the establishment of chapters in China, Thailand, Malaysia and India. He was the Founding Chairman of AILA and was on its National Board for more than 30 years.

He was the inaugural Chairman of the Motor Accidents Authority of NSW and of the Solicitors Mutual Indemnity Fund.

In the last two years, Michael's service to the insurance industry and insurance law has been recognized by a number of prestigious awards:

Having been recognized as a leading insurance and reinsurance lawyer for many years, Michael is now using his knowledge and experience for the firm in its pro bono work.

As I approached retirement from partnership and my life as an insurance lawyer, I did not have in mind a new career in pro bono. Nor did I appreciate the extent to which the clinical skills I had acquired as a lawyer could be of use and benefit to future generations of lawyers and teachers in other parts of the world. The opportunity to lead and teach educational workshops is enormously rewarding. It provides worth and joy. It is like the icing on the cake of a useful legal career. For me at this time, it is far more rewarding than a partner's share of profit.”

Supporting the Growth of Pro Bono in Mexico