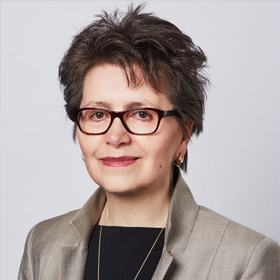 Janet Legrand is a Partner and Senior Elected Board Member in DLA Piper's London office. She is the former Chair of the Board of DLA Piper International and a New Perimeter Advisory Board member. A seasoned international dispute resolution lawyer, she is the former head of the firm's Specialist Litigation team and winner of the Legal Business' prestigious Dispute Resolution Team of the Year Award. With over 30 years’ experience representing governments, corporates and financial institutions around the world, Janet significantly contributes to the strategic vision and long-term impact of New Perimeter.

Janet has acted for several governments in the course of her career, and has represented the Republic of Zambia and the Government of Timor-Leste. Her relationships in Zambia and Timor-Leste paved the way for New Perimeter to carry out key projects in these countries. For example, New Perimeter is teaching legal writing and analysis to law students at the University of Zambia School of Law and in Timor-Leste, New Perimeter lawyers analyzed options to support trade and investment in an economic development project.

"Janet brings a wealth of experience to the New Perimeter board. Her input on our strategic direction is invaluable," said Claire Donse, International Pro Bono Counsel with New Perimeter.

Janet is a Trustee and Board Member of PRIME, the body that delivers the UK legal profession's commitment to ensure fair and equal access to quality work experience. Additional trusteeships include the Leadership Foundation for Higher Education and the Audit Committee of the University of Cambridge and she is also the Vice Chair of The Children’s Society, a British charity that rights child poverty and adolescent neglect both through its direct practices and its policy work, campaigning for changes in laws affecting children and young people.

“We are so pleased that Janet is involved with New Perimeter. Her commitment to pro bono is extraordinary. In fact, she received the Global Partner Pro Bono Award at the DLA Piper Global Partners’ Conference in 2015 for her pro bono accomplishments,” said Lisa Dewey, Director of New Perimeter.

New Perimeter is innovative and incredibly exciting. What we’re trying to achieve through New Perimeter is to deliver substantial pro bono programs of impact in the post-conflict and developing world using our lawyers around the globe. What’s unique about New Perimeter is the range of projects we work on and the collaboration of lawyers from different disciplines around the world that gives a richness to the quality of what we can produce.”